Battle Of The Bands 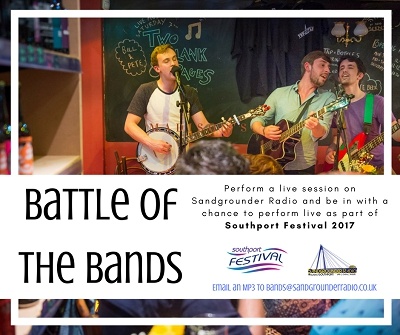 Here at Sandgrounder Radio we've teamed up with the Southport Festival to bring you 'Battle Of The Bands'.

We've had loads of entries from local bands all over the area.

WELL DONE TO 'SOME TIME TODAY' WHO HAVE WON OUR 'BATTLE OF THE BANDS'.

They are a local progressive blues rock band called the Frank Flight Band.

They've been playing LIVE and recording since the late 90's playing
original music and have 4 albums under their belt as well as many live recordings.

A two piece semi-acoustic duo hailing from and living in Southport. They both play guitar and sing on their tracks.

A group of up to 7, local musicians, coming from a wide variety of musical backgrounds, playing an eclectic mix of material on ukuleles.

With a Green Day, Blink-182 influence, pop punk band 'Some Time Today' are from Burscough and started their journey back in May 2014.